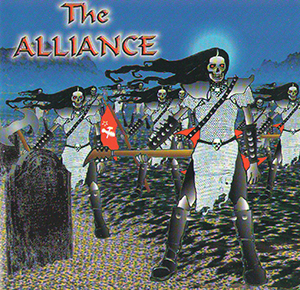 When it all started:

On St. Patty’s Day, 1999 it was said to be one of the most advanced albums of the day. Featuring a software section listing the photos and biographies of each band performing on the disc, sound quality equal to that of the major labels, and graphic cover art depicting one “Skel” for each band and the producer himself that was difficult to reproduce (yes: the tombstones are REAL), the Alliance was launched to great fanfare in 1999. Several production runs later, it has remained unchanged since then to become an underground cult classic in Heavy Metal.

The disc, conceived of by Derek McDonald himself, was completed involving over 70 people on 4 continents and featured indie bands from around the world playing almost all types of Heavy Metal. It received rave reviews from Canada’s BW/BK to Europe’s Metal Hammer. The Alliance also got retail coverage in 18 countries and has the rare distinction of being one of the few debut independent releases that got commercial airplay the day it was launched! The performance was on John Moran’s “Big Unit” Heavy Metal music show on Toronto’s Q-107! Other commercial airplay performances followed. The title represented McDonald’s desire to unite the world of Heavy Metal. Indeed, it did, at least for him, and launched his newly formed Emperor Multimedia Corporation.

** This product is now discontinued. Purchase while supplies last! **
THE ALLIANCE