(Diskery - Artist Biography Accessible and Printable Version)
[Return to Standard View]
Kyuss (1987-1996): a Heavy Metal band from Palm Desert, California, USA.
Initially playing blues influenced punk rock with John Garcia (vocals), Josh Homme (guitar), Brant Bjork (drums) and Chris Cockrell (bass) at the helm to make a kind of "stoner metal" sound under the name of Sons of Kyuss (a name taken from the game Dungeons & Dragons). In 1990 they would release an EP. This self-titled EP, however, was the second incarnation of the band for they originally named themselves Katzenjammer (German slang for "Hangover" - literal translation "moaning of a cat" and not to be confused with a band by the same name from Oslo, Norway who formed in 2005). The act never recorded under this name. Soon after starting, Bjork selected Sons of Kyuss from the un-dead monster found in the first edition of the Advanced Dungeons & Dragons role-playing game book Fiend Folio. Soon after the release of the EP, Cockrell was replaced by Nick Oliveri who originally played with the band as second guitarist Katzenjammer.

After shortening their name to just Kyuss, the act would build a local following with impromptu outdoor shows, referred to locally as "generator parties" due to the use of gasoline-powered generators to provide electricity for their equipment; these parties would feature the band performing before small crowds of people outdoor drinking mostly beer.

Their lackluster debut, Wrench (1991), a release by independent label 'Dali', featured mostly re-recorded tracks from their previous Sons of Kyuss EP. The much faster paced follow-up, Blues For The Red Sun (1992) was applauded by critics and would become widely regarded as a pioneering stoner rock record. Homme gained a reputation for his unique down-tuned, psychedelic style of guitar playing, and for creating a bass heavy sound via playing electric guitars through bass guitar amplifiers; the garage-styled stoner sound set a standard and came virtually from nowhere. They soon found themselves playing with stars Danzig, Metallica and the like.

Oliveri left the band following completion of Blues For The Red Sun, to be replaced by Scott Reeder.

When the 'Dali-Chamelion' label went bankrupt, Kyuss were approached by 'Elektra' who stepped in to renew their deal after its purchase of the former label's assets. Under the major label's umbrella the next album, the self-titled Kyuss (1994), would be released a year after recording due to band member and label administration changes. Those band member changes were highlighted by Bjork leaving the band following completion of the recording sessions. Originally intended to be titled "Pools of Mercury", the album commonly came to be known among fans as "Welcome to Sky Valley", and ultimately received critical acclaim while demonstrating a more mature psychedelic sound.

But being a major, 'Elektra' had no clue how the indies marketed their unique sound and as a result their sales were less than what was expected. The next effort, ...And The Circus Leaves Town (1995), although a stronger effort, proved to be the act's last as they suddenly broke up less than a year later in 1996. A posthumous compilation was released in 2000 featuring B-Sides and live tracks. A boxed set and two more compilations would follow in 2007 and 2018 respectively. Attempted reformations under the names Kyuss Lives! and Vista Chino resulted in no recordings. 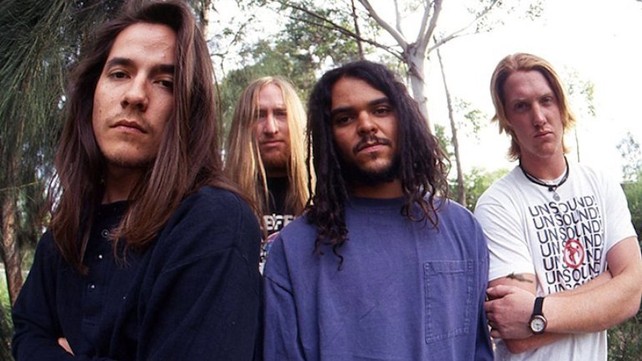