(Diskery - Artist Biography Accessible and Printable Version)
[Return to Standard View]
Mammoth (1987-1999): a Hard Rock band from South London, UK.
When Nicky Moore (vocals/keyboards) and John McCoy (ex-Gillian; bass) recruited Big Mac Baker (guitar) and 'Tubby' Vinny Reed (drums/percussion) they formed what they thought would be an alternative hard rock act to the party boys that they thought were dominating the mid 1980s charts. As useless as that proposal seemed it might have held some novelty appeal if it wasn't for the fact that the act never really made it from the get-go. Almost from their inception they were embroiled with a long-lasting dispute with their record label 'Jive'. When their eponymous debut album was finally released in 1987 any novelty appeal they may have had wore off, despite the album featuring humble tracks like Fat Man and All The Days. Also in 1987 the EP Fatman would appear to the same attention. Two years later they would try to make a return with a split with U.D.O. after which they went silent to return in 1997 with XXXL, but after its release the act went as extinct as their namesake.Footnote: The name Mammoth has been passed around many times through heavy metal history and this act should not be confused with either Van Halen's original name or another occurrence of the name in the 1970s, or the Scottish doom band of the same name. 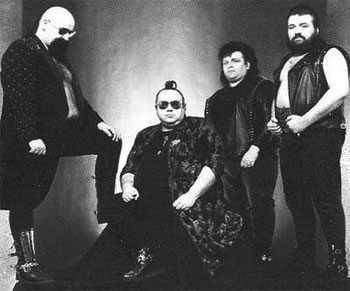