(Diskery - Artist Biography: Simple/Printable Version)
Skullview (1995-present): a Power Metal band from Chicago, Illinois, USA.
On the southern shores of Lake Michigan amidst the haze and pollution of the Indiana steel mills, coke ovens and blast furnaces, Skullview was plotting a heavy metal assault to tackle what they saw to be the destruction of American heavy metal, that being Scandinavian black metal, Rap, hip hop and the like.

Formed by drummer Joe Garavalia and guitarist Dean Tavernier, their self-titled 1996 debut was simply hard, driving and head banging Metalguitarist Dave Hillegonds and Peter Clemens (bass) added to the arsenal of weapons this band would wield, but their biggest asset was the acquisition of "Earthquake" Quinby Lewis, who's voice harped back to the days of Halford and Dickinson.

Their next offerings, Kings Of The Universe (1999) and Legends Of Valor (2000), boasted Manowar styled cover art with an Iron Maiden, Jag Panzer and Iced Earth musical style and equally fanciful lyrics. It delivered exactly as advertised, hard hitting traditional heavy metal, leaving little question of its sincerity with tracks like Blast Furnace among their repertoire.

The third offering, Consequences of Failure (2001), was no less powerful. Unfortunately Consequences of Failure, although a well produced disc, fell right in line with their tried and true basic heavy metal slash and burn approach to music, which by now was wearing thin; evolution was needed. Oh they still managed to pump out anthem tracks like Skullview Warrior, and the part three of their continuing Gleam Of The Skull episodes, but the albums were quickly becoming familiar. The point of Skullview, however, was not to change the music but to be revivalists, and they stuck true to their word. Infighting within the band would see "Earthquake" Quimby leave shortly after the former album's release. Issues with the record company, with offers from a rival, were tempting but they continued to stay the coarse to total Metal domination on Chicago's 'R.I.P.' label, even proving to be a fair seller via 'Emperor Multimedia's Diskery' on-line music sales system & archives. 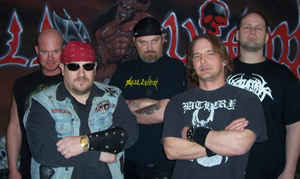