They recruited Peter Criss (Real Name: George Peter John Criscuola; a.k.a. Catman; born December 20, 1945; drums/vocals) and Ace Frehley (Real Name: Paul Frehley; a.k.a. Space Ace; guitar/vocals) in quick order. After only two performances Kiss were signed to the newly formed 'Casablanca Records'. In a matter of a single year, Kiss (1974), their debut, made 87 in the charts with their first tour starting on February 5, 1974, in Edmonton, Alberta, Canada as an opening act. The follow-ups, Hotter Than Hell (1974), and the aptly titled Dressed To Kill (1974) did equally as well.

In 1975 Kiss' first big hit came with their fourth release Alive (1976), a live set that produced the single Rock 'n' Roll All Nite. It went platinum, making it into the US top 10. During this time, their music was so greasy, hot and glittery it could have been used to cook fries at the local fast food joint!

From the start, Kiss was a theatrical band; their sexually charged rock fantasies involving fireballs, face paint, spikes and leather gave them the popularity to survive for decades. They were now billed as "The Greatest rock 'n' Roll Show On Earth". Destroyer (1976) was no different than it's predecessors, and managed to give them a US 11 (and their first UK charting at 22) with the award winning Peter Criss penned and crooned ballad composition Beth; the single of this track would be the biggest hit in their history, and it would become one of the biggest hits in all of the heavy metal genre history!

The next three albums, Rock And Roll Over (1976), Love Gun (1977) and Kiss Alive II (1977) were also automatic platinum sellers, so much so that the 1977 Gallop poll rated them as the number one act in the USA. Kiss had become a marketing bonanza! Dolls, lunch boxes, make-up kits, board games and even a Kiss pinball machine were sold. Marvel comics made two comic books based on them and there was even a made-for-TV sci-fi film Kiss Meet The Phantom Of The Park, while the fan club had a membership in the millions. In 1978 they achieved another coup when all four members released solo records at exactly the same time, a feat never before or since done. Because of this they made recording history by shipping the most records to store shelves by a single "unit" (group) in such a short time span; all four were self-titled albums.

I Was Made For Loving You was the big hit from their follow-up 1979 Dynasty, a more disco inspired recording that yielded another platinum certification. On this release, session player Anton Fig, who was also present for the recording of their Unmasked release in 1980, replaced Criss. Eric Carr, however, assumed the seat on a more permanent arrangement thereafter. Music From The Elder (1981), a concept album featuring medieval style horns, strings, harps, and synthesizers, was Carr's debut that saw Kiss' style changing from the old. In the end, this new marketing bent ended off being an ill-advised venture. Frehley left unhappy with this new direction and was replaced by Vinnie Vincent. Creatures Of The Night (1982) was a back to basics approach to their music, but it failed to win the ears of the audience as they wanted despite making top 50.

By the time 1983 came around the audience was abandoning them, so in a radical attempt to get them back KISS committed the ultimate in heavy metal blasphemy - they removed the make-up live on MTV, and it would stay off for more than 10 years! Shortly after, despite this move, they got a top 10 in the UK with Lick It Up (1983), mostly on the strength of its title track. Mark St. John would replace Vincent shortly after. Their Animalize (1984), Asylum (1985) and Crazy Nights (1987) releases gave them chart rankings like those of their hay-day of the 1970's by beating the top 50 marks, with Crazy Nights achieving the highest at number 4 in the UK Asylum, for its part, would feature Bruce Kulick taking over lead guitar. ...And this, as the saying goes, "was the end of their age of innocence".

During the 1980s they would engage in various soundtracks and compilations. Tragedy struck them, however, after the Hot In The Shade (1989) release for a few months later, in 1990, Carr died due to heart problems complicated by cancer. Shaken but not stirred, as James Bond would say, they continued on with Eric Singer on drums, and in 1992 they came back with a vengeance on the Revenge LP, making top 10 on both sides of the "pond", determined to show the newbies who the teacher really was.

In 1994 a tribute album was done by such unlikely sources as Garth Brooks (known for his work in country music), Lenny Kravitz, Stevie Wonder, Rage Against The Machine, and others. It was an ill-advised attempt at honoring the band.

Kiss Alive III (1993) was a much better performance, both in sound and style, much like the Kiss of the old. But their popularity was never what it was in the 1970s. Realizing their mistake, after all these years, they made a guest appearance at the 1996 Grammy awards in full make-up and costumes to announce a new world tour. Indeed, that tour was a successful one. What's more, the original line-up was back and permanent in the classic old style and uniforms, toting as much make-up as they could put on! Since then, their popularity has gained momentum again. At the 1997 Kiss convention thousands of people showed up paying more than $100 a ticket.

In 1998 it was announced that the original band members would be featured in the film Detroit Rock. The film was a basic thrasher flick featuring a silly plot depicting a group of long haired teens in various comical situations as they try to secure tickets to a sold out Detroit Kiss show. The movie studio was banking on the multitudes of Kiss fans making it a hit; not so, unfortunately, because it was less than a blockbuster but will be most likely entered into the cult movie hall of fame.

In an attempt to cash in on the so-called "unplugged" series of albums being released by alternative and grunge acts for MTV, Kiss also released their Kiss Unplugged (Live) in 1996. Carnival of Souls: The Final Sessions (1997) didn't chart in the UK, but reached 27 in the US The supporting tour, again with them in full costumes and with the original line-up of Simmons, Stanley, Frehleyand Criss, was a huge success.

Psycho Circus (1998) although less noted, was nonetheless a hit because of their brand name status, and although it was the first album with the original lineup since 1979's Dynasty, the contributions of Frehley and Criss were minimal. The follow-up 2000 live effort Kiss Alive IV (subtitled "Symphony" by featuring the Melbourne, Australia Symphony was an impressive set (double gate-fold with triple album in vinyl format) got nowhere and has since been questioned as to whether it has remained on the market.

On August 11, 1999, Kiss was inducted into the Hollywood Walk of Fame.

On the eve of the Japanese and Australian leg of the Farewell Tour on January 31, 2001, Criss suddenly left the band once again, because he and the band could not come to agreement with his contract salary. Taking his place was previous Kiss drummer Eric Singer who, in a move that was controversial among longtime fans, assumed Criss's 'Cat' stage persona/costume as the Farewell Tour continued.

With the band scheduled to call it a day supposedly by early 2001, a career-encompassing collection entitled The Box Set (94 tracks on five CDs) was released in November of that year, while that summer saw one of the most extreme forms of Kiss merchandise ever: the 'Kiss Kasket' (yes... a coffin).

They also made a guest appearance at the 2002 Winter Olympic Games in Salt Lake City, Utah. Then, on March 6, 2002, Kiss performed a private concert at a resort in Trelawny, Jamaica. Frehley, who was no longer under contract, did not perform with the group with the Olympic appearance being his final. He was replaced by Tommy Thayer, who donned Frehley's Spaceman makeup and costume for his first live appearance with Kiss.

In February 2003, Kiss traveled to Australia and recorded Kiss Symphony: Alive IV with the Melbourne Symphony Orchestra at Etihad Stadium (then known as Telstra Dome) in Melbourne. Thayer once again replaced Frehley, while Peter Criss returned to the group. This album was the first released on Sanctuary Records, which has since been sold to Universal Music Group, now owners of the rest of Kiss' catalog.

Despite claims made prior to the Farewell Tour that it would be the group's last, Kiss announced a co-headlining tour with Aerosmith in 2003. Frehley announced that his departure from the band was permanent, stating that he believed the Farewell Tour would be Kiss's last, and that he did not want to open for Aerosmith. He was permanently replaced by Thayer, as Kiss moved into a post-reunion phase that saw the band into a new line-up, permanently featuring Thayer as "Spaceman" and Singer as "the Catman". On this tour, the group introduced the "Platinum" tickets package, with the most expensive packages costing $1,000. This package included a seat in the first five rows, a meet-and-greet with Kiss after their performance, and a photograph with the band. The tour earned more than $64 million in 2003, which ranked number seven for the year. After the tour, Simmons and Stanley did not renew Criss' contract when it expired in March 2004. After the conclusion of the tour, Kiss performed only sporadically for a number of years.

In April 2007, tragedy struck Kiss again. Their former guitarist, Mark St. John, died from a cerebral hemorrhage at age 51. After being fired from Kiss in 1984, St. John formed the short-lived glam metal group White Tiger. In 1990 he briefly collaborated with Peter Criss in a band called The Keep, which only performed once and released no recordings.

2009 would see Paul Stanley release his new album Sonic Boom, including a CD of new material, re-recorded versions of famous Kiss hits (previously released as Jigoku-Retsuden, a Japanese exclusive album in 2008) and a live DVD in Buenos Aires, Argentina.

December 17th, 2013 saw Kiss inducted into the rock and roll Hall of Fame.

On August 15, 2013, it was announced that Kiss (who performed the night before of Arena Bowl XXVI) had purchased a share of an Arena Football League expansion franchise set to begin play at the Honda Center in Anaheim, California in 2014. The band (in specific, their two lead members Gene Simmons and Paul Stanley), their manager Doc McGhee, and league veteran Brett Bouchy jointly own the team, to be called the Los Angeles Kiss.

In 2016, Simmons and Stanley made cameo appearances in the 2016 movie Why Him?Footnote: How big is the Kiss marketing empire? Including merchandise, side businesses and recordings, the Kiss brand name is worth over $1 billion US dollars making Kiss the most valued name (in dollars) ever in music history!

The Kiss logo has been altered so that the twin "S"s that look like lightening bolts appear like "Z"s reversed in Austria, Germany, Israel, Switzerland, Poland, Lithuania and Hungary to avoid controversy or to comply with local laws that forbid Nazi imagery as the lightening bolts are considered too similar to the Nazi "SS" markings in these places. 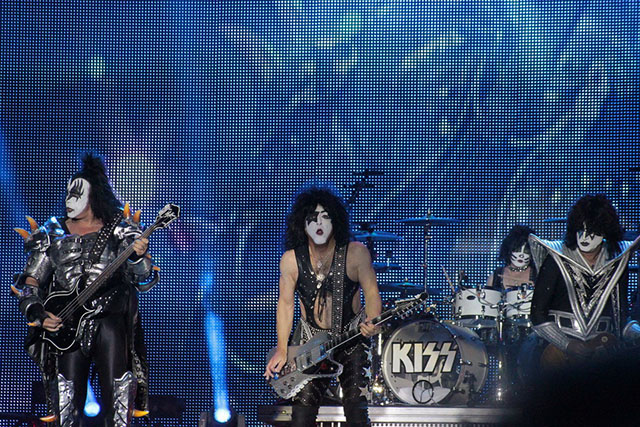