(Diskery - Artist Biography Accessible and Printable Version)
[Return to Standard View]
The Lazys (2007-present): a Hard Rock band from Sydney, Australia.
Many people believe that AC/DC were all there was to Aussie rock, but just as AC/DC are in their declining years an upstart would emerge to usurp the throne. The Lazys featuring Leon Harrison (vocals), Mathew Morris (guitar), Liam Shearer (Rhythm guitar), Glenn Williams (bass) and Andy Nielsen (drums) would quickly set about to release Nicotine Soul EP (2007) that would feature their most famous track so far, All Fired Up, used in both television and film soundtracks. The self-titled EP would then follow in 2009, as well as their debut album proper Prison Earth (2010). That album would get much fan fare in Canada because two tracks from the album were co-written with Ian D'sa (Billy Talent) and produced by Garth Richardson (Rage Against the Machine, Biffy Clyro). After extensive touring of that country they would perform at the Sound of Music festival in Burlington, June 2017. 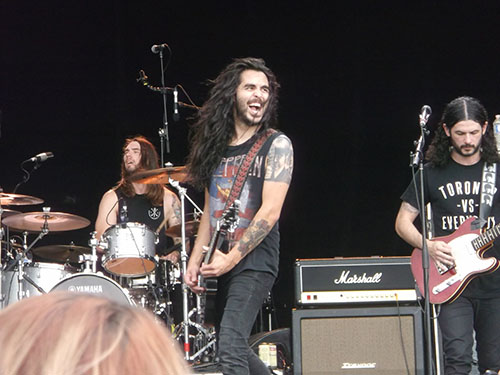 Artists Linked With The Lazys