(Diskery - Artist Biography Accessible and Printable Version)
[Return to Standard View]
Emperor Magus Caligula (1973-present): a Musician from Ludvika, Sweden.
Emperor Magus Caligula (Real Name: Magnus "Masse" Broberg; born 23 May 1973: Ludvika, Sweden) is an extreme metal musician who has been practicing since approximately 1989, but is best known as the former vocalist, bassist and lyricist of Swedish black metal band Dark Funeral (1996-2010). He has also been the vocalist of Demonoid, Dominion Caligula, God Among Insects, Sportlov, Sanctification and original vocalist for Hypocrisy, among others. In 2011 he joined Witchery to replace Legion until 2016 but never recorded with them.

When it comes to the stereotypes about the black metal genre, Caligula is the 'real deal'. Caligula is a purportedly a practitioner of 'LaVeyan Satanism', the same religion founded by Anton LaVey and the same that Marilyn Manson is an ordained minister within. Additionally, while he has on one hand distanced himself from 'National Socialist black metal' movement (black metal bands who believe in the National Socialist (a.k.a. Nazi) movement), he has also said that aspects of Nazi ideology were "not that wrong" and that the Nazi concentration camps were bad, but not "that horribly bad" during an interview with Dark Funeral (Metal-district.de. 13 May 2007). Like many other black metal musicians, he has generally assumed an apolitical stance, although he expressed disdain for former Islamic terrorist leader Osama bin Laden, with his audience when playing live, as well as denouncing Roman Catholic priests due to widespread child molestation allegations. Caligula was also quoted as being "somewhat impressed" by the premeditated murder of Fr. Faustino Gazziero, a Catholic priest, by Dark Funeral fan Rodrigo Orias at the Metropolitan Cathedral in Santiago, Chile and doubted their music being the direct cause of Orias' murder of Gazziero. Despite his religious or political beliefs, Caligula has never been accused of harming anyone and therefore they are simply his beliefs and have not affected his career.

Not sure where Magnus "Masse" Broberg adopted the name, but Caligula is infamous for it was the nickname given to Gaius Julius Caesar Augustus Germanicus (31 August AD 12 - 24 January AD 41), the Roman emperor (AD 37-41). There are few surviving sources about the reign of Emperor Caligula, although he is described as a noble and moderate ruler during the first six months of his reign. After this, the sources focus upon his cruelty, sadism, extravagance, and sexual perversity, presenting him as an insane tyrant. In early AD 41, Caligula was assassinated as a result of a conspiracy by officers of the Praetorian Guard, senators, and courtiers. 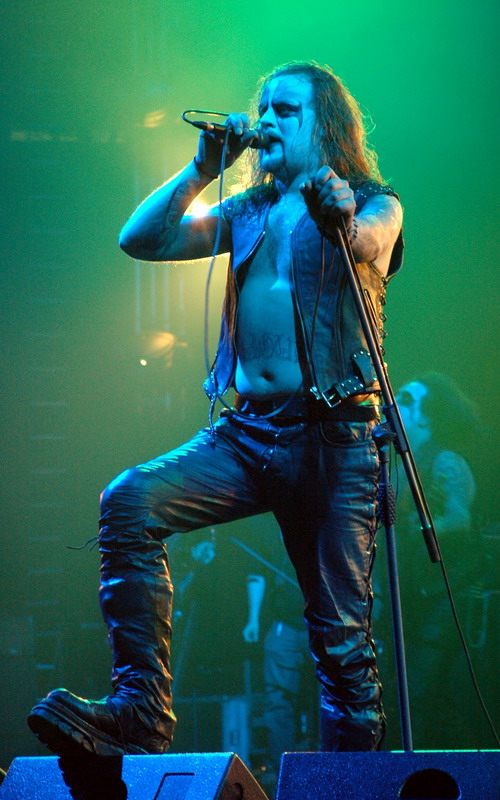