(Diskery - Artist Biography Accessible and Printable Version)
[Return to Standard View]
M Francis Fester (1999-2003): a Black Metal band from Greenbelt, Maryland, USA.
A self-proclaimed messiah, a pickpocket, an engaged behemoth, a fallen man of the cloth. Four individuals in many ways, but with one very common goal--to disturb your mind and to invade your nightmares with their twisted vision. -- So says the media 'bumf' of this band.

The story of M Francis Fester begins in a Washington D.C. S&M bar where, featuring former members of their previous outfit Level, they first performed as a new group. They would tour every "hellhole" offered to them until 2000 when their debut release I M Your God was independently published. I M Your God was pure S&M influenced punk rock black metal to its extreme. Their influence was basically their own imagination since few had ventured this far with the genre. Being lifestyle sadomasochists and lifestyle goths, their music showed all of their interests efficiently packed into one CD recording. The disc was a frightening look into the mind of its main character M Francis himself. This disc is a story of mass murder, mental anguish and S&M, cleverly disguised in the form of a rock opera or audio stage play. They had found a way to reformulate the sex, drugs and rock 'n' roll recipe! The CD was inspiring and frightening all at the same time. Naturally, it was picked up by 'Diskery' distribution [back when we sold CDs]. Their sound has been described as Marilyn Manson meets Dark Funeral, Nine Inch Nails and Ministry.

In March 2002 their original line-up underwent an overhaul with Bukk 50 (keyboards/sampling) being replaced by Sideshow. Sideshow would also replace Dellion Kryst II on drums. Dressed to the nines in leather, S&M and gothic gear, it's no doubt that the line up of M (vocals), Minnie Mean (guitar), Sideshow (sampling/keyboards/drums) and Dee Brian C (bass) will be heard from again as God: 13, the name the band assumed shortly after.

Footnote: The "M" in "M Francis Fester" is derived from "M"'s love of the number 13; M is the 13th letter of the alphabet. Furthermore, one member (who shall remain nameless due to a swearing of secrecy with *me*), works for the Republican National Congress, the same political party of one Mr. George Bush (both Jr. and Sr.) and Ronald Reagan, who was president while the wives of certain members of said organization launched the PMRC - what a lovely twist of fate. 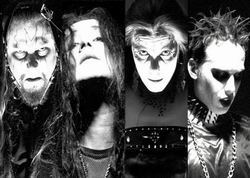